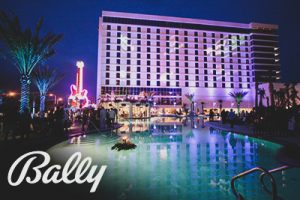 Like most vibrant businesses, especially those in the gambling sector, getting back to normal after the economic upheavals of the world health emergency creates a fairly complicated financial picture where new record earnings jumps can disappear into the bottom line as losses are made up. The good news for Bally’s fans is that all sector participants are dealing with substantially the same situation, so Bally’s predicament is not unique.

On the bright side the company posted record revenue of US$314,8 million – up $198.2m (169.9%) year over year. However, during the comparable period last year the company claimed $6.7 million in profits while posting a net loss of $14.7m this year.

The company’s retail casinos had record high revenues of $301.6 million and more than double last year’s net income at $49.4 million.

As mentioned earlier, Gamesys numbers are not part of the official results, but we can report the vertical produced record revenue of $278.6 million on a constant currency basis.

Gamesys Acquisition Not in the Numbers

“As a result, our business is evolving from a regional casino operator into an industry leader in retail, sports, media and iGaming, which will see us harness a set of assets that provides a formidable platform for growth as a digital-first leader in global gaming entertainment.”

The company’s stock was up about 5% Friday on the closing bell at 45.23. Looking at analyst’s reports on the stock, only three premium analysis have been issued over the last three months, leaving it somewhat out of sight and out of mind for some casino investors. However, Marketbeat has it rated as “Buy” and states “According to analysts’ consensus price target of $67.38, Bally’s has a forecasted upside of 49.0% from its current price of $45.23.”

We looked for some correlation for that in the statements and actions of vested Bally stock controllers and found Fenton stated: “As long as our stock remains as low as it is, we will be buying it.”

Looking into the numbers, Bally’s has about $400 million in unencumbered cash flow that can be focused on capital expenditure investments, share buybacks, and the North American iGaming market. The company has already invested about $66m in capex this year and Fenton said he expects that number to continue ramping up.

As more and more of the US interactive market opens up, the company will keep investing in it. About 20% of free cash flow or as much as $80m may be invested in generating their target of $125m in NA iGaming revenue over the next year. It’s yet to be seen when US online gaming will become profitable.

has a very predictable cost structure and we look to maintain that going forward.”

Bally’s employs about 10,000 people and runs more than 15,000 slot machines, 500 gaming tables, and has 5,300 hotel rooms. There are currently 14 casinos in 10 states but those numbers will change to 16 in 11 when they close on their purchase of Tropicana Las Vegas and open the doors on a new casino in State College, Pennsylvania near the Nittany Mall. The company recently announced a $100m expansion of one of their Rhode Island casinos.