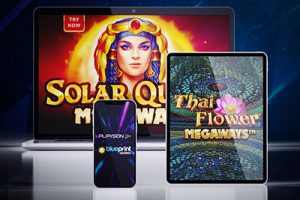 Slot developers have been having a heyday with creating brand new games as well as revamping customer favorites since BTG began offering the technology to other creators well over a year ago.

Red Rake Gaming took NetEnt’s Gonzo’s Quest and added BTG’s Megaways to double down on one of the most popular slots of all time. Maybe the fact that Evolution Gaming now owns all three companies made it easier to perform a hat trick of three bullseye’s but other developers have been creating dynamic duos as well, one of them is Blueprint Gaming with over 30 releases under the license so far.

The most recent Blueprint creation saw its start as a Reel Time Gaming slot titled, Thai Flower. This RTG should not be confused with Realtime Gaming, the “other” RTG even though both of the studio’s video slots were originally developed in Australia.

REEL Time Gaming has been in the business over 20 years and has created over 100 titles for their own cabinets and others’ on casino floors as well as online. The provider has been licensed in the UK by the Gambling Commission since 2015 for cabinet games and since 2018 for casino software.

Variation on a Winning Theme

Thai Flowers Megaways builds on the original RTG Asian themed slot with Big Time Gamings constantly active feature mechanic that can generate up to 15,625 ways to win on a single spin. This is a pared down version of the massive Megaways games with up to 117,649 megaways, but it still offers a playing field of six reels with up to five positions each.

Players who land at least three scatters will be awarded 12 free spins and the interactive element of the game allows you to choose three of the Lotus flowers to set the bonus game special symbols. Only the three revealed symbols will be active during the free spins!

Thai Flowers is a medium to high volatility game and is currently supported under license in the jurisdictions of the UK, Malta, Gibraltar, Isle Of Man, and Alderney.

Playson has also reached back into the bag of “what works” and has revamped their classic Solar Queen with a similarly pared down number of megaways, but only about half the number at 7,776. That is still a lot of potential win lines but the excitement comes from the constantly shifting reels from 2 to 6.

Existing players of the popular slot won’t really see any other visual differences as far as the art and animations are concerned.

The original slot’s Flaming Frames feature returns to the new version with 10 spins wherein the Sun symbols create a frame on fire that turns reel positions cells into Wild symbols for the last spin. When they happen again and again look for multipliers going up to 10x.

A “buy a feature” mode should be available in most jurisdictions giving players the chance place 100 bets at once to trigger the free spins feature by conjuring 3 Scarab scatters to trigger the bonus spins where wilds are sticky throughout the feature.

Playson’s Head of Product, Vsevolod Lapin said: “We’re delighted to offer players a reimagined version of the popular Solar Queen title, now with the impressive Megaways mechanic. The latest release is another example of Playson’s ambition and desire to create industry-leading products, as well as our ability to reimagine and improve our own portfolio of slots.”

Look for the following game features on Solar Queen Megaways: