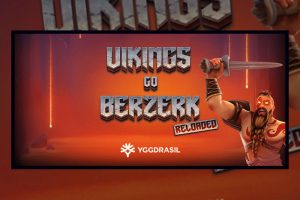 Innovative online casino games developer Yggdrasil has further bolstered its Vikings suite of online slots with the recent release of the fourth installment in this hugely popular series.

The company announced this week that it has reloaded its Vikings Go Berzerk game. Originally released in 2016, the title has remained a player favorite for the past five years in many markets around the world.

As mentioned above, Vikings Go Berzerk Reloaded is the fourth game in the blockbuster Vikings series. The first game in the collection was launched in 2015. The latest release has been highly anticipated by slot aficionados as the previous title in the series, Vikings Go to Hell, came out all the way back in 2018.

Vikings Go Berzerk Reloaded includes familiar features that can be found in its Vikings prequels, including the Berzerk Mode and Ragnarök Free Spins but also comes with a host of new, immersive experiences, including Wild multipliers.

A Free Spins Gamble feature provides players with a 50/50 chance to upgrade Free Spins. The feature unleashes up to four Berzerk Vikings into the fight and these can massively boost the game’s win potential.

During Free Spins, Wild multipliers of up to 8x can appear on the reels, while a treasure chest can hop on the last reel with varied prizes from extra Berzerk Vikings to additional Wild symbols and multipliers.

The newly added Ragnarök Spin is a random feature that is available both during base game and in Free Spins mode. When it gets triggered, all high paying symbols that land within a single spin are turned into Wilds. If the feature activates during Free Spins, the Wilds stay sticky throughout the feature session.

As with the rest of the games in the Vikings series, Yggdrasil CEO Fredrik Elmqvist has been revealed as the mastermind behind that title, as well. All four games have been crafted through a tight collaboration between the leading provider’s game developers and its maths team to make sure that the experience delivered is “slightly more gambling oriented.”

Of the latest addition to the widely popular slot series, Mr. Elmqvist said that three years after the release of the last chapter in the Vikings series, they thought it was the right time to create another sequel that “takes the gameplay to the next level while maintaining the thrilling elements that have made the original titles so popular.”

Mr. Elmqvist went on to note that their Vikings series has had “players spellbound for years and has proven that longevity is possible with the right combination of a great theme, action packed gameplay and wild features.”

In addition to expanding its games library with new thrilling titles, Yggdrasil has recently celebrated a number of other exciting milestones. The company has obtained a license from the Hellenic Gaming Commission to provide its content in Greece’s recently reorganized iGaming market and has debuted its products in Slovakia through an expanded relationship with online gambling operator Tipsport.